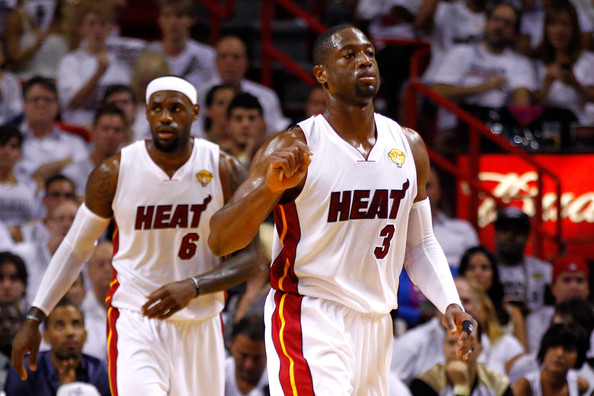 10 lay-ups, one jumper and 4 foul shots are a simply the best way to describe the Miami Heat’s start that has lead to a 2-1 advantage in the Finals. That effort in the game’s opening period set the tone for the entire match. OKC’s offensive game seems to be getting altered by the Heat’s defense but OKC’s defense is truly the concern.

Miami’s aggression getting to the basket is the difference in the series at the moment. The Heat never settled for the easy jumper all night, except for a five minute stretch in the 3rd period that saw OKC take a 10 point lead. In some cases they passed up a great look at the basket to attempt to get the ball even closer to the rim for a lay-up. The squad from South Beach took their lead from the MVP and the Flash.

Wade’s energy level was high through out the game and his usual “at the rack” mode was in full effect, but it was really James’ “in you’re face” mode that was the difference in Game 3. James made 9 out of his 11 shots in the paint cashing in on the pace established by Wade.

James played great defense against Durant in the 4th. The King is frustrating the 3-time Scoring Champion by going right at him when Durant’s guarding him and using brute strength and force to make KD one dimensional. Durant scored only four points in the last period of Game 3, after scoring 33 in the prior two 4th quarters. James also hit a huge 3 pointer with 52 seconds left in the 3rd quarter, that took the lead from the Thunder.

Westbrook and Harden appear to be feeling the pressure of basketball’s ultimate stage. Combining to go 10 for 28 and getting only 9 foul shots, the duo barely surpassed Durant’s total of 25 by three points. The tempo setting Westbrook seemed passive at times and over aggressive at others but OKC needs him to get comfortable if they’re going to avoid the guillotine. I don’t know where Harden’s head is but it better be on what’s happening on the court.