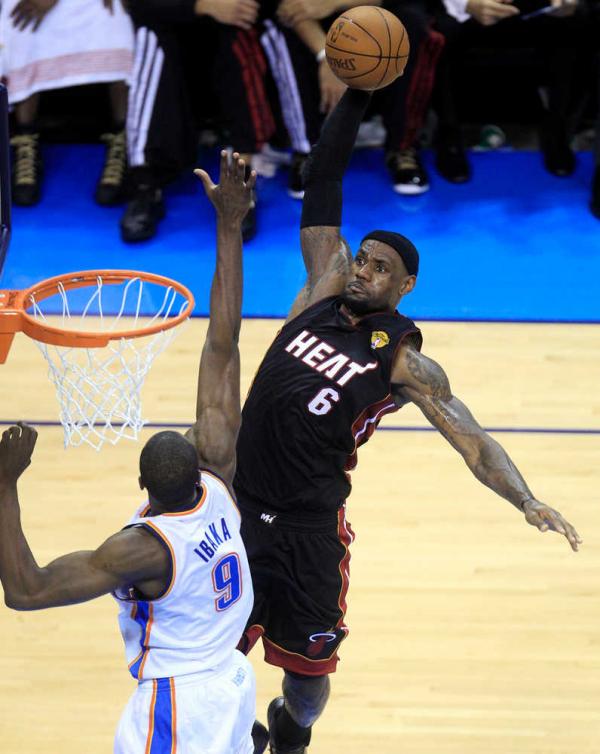 After a pedestrian Game 1, D. Wade started Game 2 aggressively. He got 2 shots blocked, hit the deck and commited an early foul. His assertiveness though, set the tempo for the visiting Heat. Battier made the most of his opportunities by hitting two early 3’s and making some savvy plays that lead the Thunder to early foul trouble.
Wade drew the second foul on Durant with 3:40 to go in the 1st. Giving the Heat a distinct advantage getting to the rim, Wade and James went to work. James under the rim reverse lay in and then Wade hitting a 20-footer forcing OKC to call time with 2:11 left in the first quarter. Coming out the break Harden continue his hot start hitting an elbow shot pushing his mark to 3-3. Yet that still wasn’t enough for the Thunder to get going by the end of the period. Westbrook picked up his second foul on a silly reach in, 90 feet away from the goal.  Harden’s 10 points were the only reason the Heat weren’t pulling away.
Durant and Westbrook started the second period as spectators to the show Wade put on. Hitting a off balanced, one handed 12-footer and then followed it on the next possession with a block of a Harden shot. That summoned the Durantchula out the coffin. In comes one star as one hits the bench. James picked up his second foul with 9:33 left in the quarter. After trading a few buckets, Harden built on his early by cutting the lead to ten compelling the Heat to talk. With OKC constantly chipping away at the margin, Wade quiets Chesapeake Arena with another 20-fotter with 7:06 left in the half. Then, play stopped after a bad call gave the Heat a ten points lead on an Ibaka goaltend and that quickly jump to a 13-point lead for Miami.
Each time in the period and half that is seemed the Thunder would make a push, Wade would “Flash” some brilliance. Picking up his 2nd personal with 4:26 he needed to sit with the Heat up by 12. Having Wade on the bench, M.I.A. kept the pressure on growing the lead to 17 off the backs of Bosh and James. Bosh’s intensity was the driving force to the run with a double-double with a 1 and a half left in the 2nd. But as good teams do, the Thunder started to surge. Cutting the lead to 11 with :30 seconds left in the half James quieted the run by scoring on two straight possessions.
Coming out the break things got sloppy with the Thunder getting into the penalty by 8:53. Durant getting into a rhythm and being in the bonus still couldn’t help the Thunder gain ground with James scoring 12 in the period aided by Battier’s unexpected consistency on the offensive end with Wade and Bosh being the stars the road team needed. James played every minute, got to the line and kept Durant’s eligibility in jeopardy.
The 4th started with Durant committing a silly foul. 5 fouls on the Texas collegiate didn’t stop him from balancing off the Wade and Bosh flurry at the beginning of the quarter. Waking the home team up with a 3 Ball and a monstar dunk on consecutive series. Harden continuing his good night helping cut the lead to six. M.I.A.’s big three responded with each making a play on the next two possessions. OKC just wouldn’t go away getting an and 1 from Westbrook, Hardin getting to the rim and Durant hitting a 3.
A star studded back and forth saw the Thunder climb all the way back to within three with 1:45 left. James stepping up to the moment hitting a bank shot giving the roadsters a five point advantage. Miami played big time defense on the next possession altering two shots and winning a review which lead to a Wade to Bosh slam that sealed the deal. Durant did all he could do scoring a quick lay-up with 48.5 then hitting a huge three pointer that brought OKC within a bucket with less than 40 seconds. But a miss(some say a no call) on the next offensive possession would ultimately be the home team’s undoing. LeBron hit the icing free throws and we’re now tied at one.  Bing, Round 3!