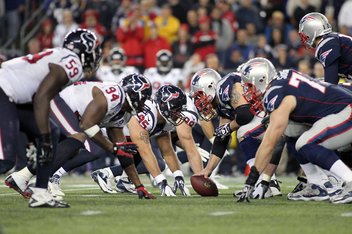 Tom Terrific can become the All-Time Leader in Wins for a QB today if New England beats Houston in the Divisional Round. He would past the Great Joe Montana, who sits at the top of the list, with 17 wins. They both have 16 now. Brady will have plenty of help with the league’s highest-scoring team backing him on Sunday at Gillette Stadium.

The New England Patriots got a dominant performance in a rout of the Texans last month from Tom. Brady passed for 3TDs on the Pats first three drives. The Patriots stormed out to a 21-0 lead and canceled any chances for the Texans’ to control the game on the ground. New England went on to win that game 42-14 on Dec 10.

Brady passed for 296 yards, 4 TD passes in that match, completing 21 of his 35 passes. “I think you learn from it,” said Brady, “You also understand things aren’t going to be the same. They’re going to see things that they’re working on that are going to be different for us this time around. We do the same thing.” Things will be different this time around for Houston because the Pats were without the injured Rob Gronkowski the last time the two teams met. He’ll play on Sunday.

The Texans shook off their horrible finish to the season and limited Cincinnati to 198 total yards in last week’s 19-13 Wild-Card win. Arian Foster keyed the victory with 140 yards on the ground and TD. He also caught 8 passes for 34 more.

“Last week, you saw why this guy is one of the top offensive players in the game, not just a back, but a top offensive player in the game,” Patriots defensive tackle Vince Wilfork said. “The things that he can do with the ball in his hands, in the pass game and running it … and he’s a great blocker when they ask him to block. I mean he’s a special player and we understand that.”

Houston has one of the best backs in the league but their QB is the key to this game. Matt Schaub completed 29/38 passes for 262 yards in his first career playoff start last week, with a pick returned for a TD. Schaub threw for 232 yards, no touchdowns and one pick in the first meeting.

The Pats will handle Houston again. New England and the weather will hamper the Texans and Sunday will be a long day for Schaub and the crew.

Viewing Note:Brady is 10-2 at home in the playoffs. J.J. Watt has 4.5 sacks in 3 career playoff games. Foster’s 425 rushing yards are the most for a player in his first three playoff games. Houston has won all 8 games this year when he has reached 100 yards.