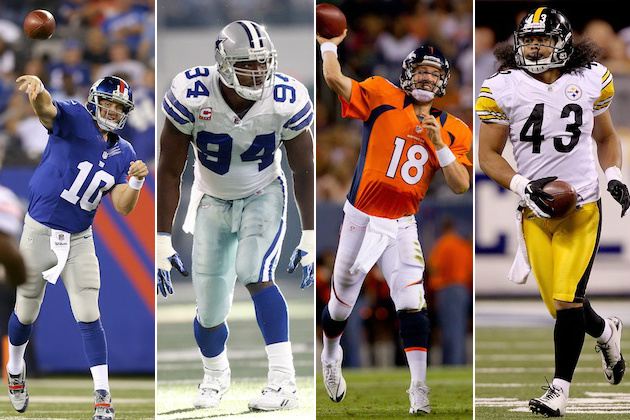 Opening week in the NFL might be the most exciting time throughout the entire sports calendar year. Coast to coast the gridiron warriors will be began their battle for football supremacy this weekend. The Cowboys drew the first win of season taking out the G-men at Met-Life. We’ll take a look at every game this weekend and see who will join the Cowboys in the ranks of the unbeaten.

The Colts travel to the Winding City to debut their new pony Andrew Luck. He will be greeted by a nasty, veteran and opportunistic defense that’ll be amped by the opening day home crowd. He also has to deal with the reunion of Cutler and Marshall. The combo will provide a passing tandem never seen in Chicago this year. BEARS 31, Colts 13

Jaguar fans have some reasons to be optimistic for the future. Gabbert looks like a different man with the arrival of Justin Blackmon. Jones-Drew got into camp before the season started. The defense is quietly a top ten caliber group. Don’t expect the Jags to make the playoffs but do expect them to eliminate some teams. The Vikings on the other hand to me just seem broken down squad from the team lead by Favre. Peterson seems to be rushing back and I don’t think Ponder has enough weapons. At least the Vikes open at home. JAGS 27, Vikings 17

In Houston, the Texans host the Dolphins to kick off their most anticipated season in team history. Schaub’s health is paramount this season for the ultimate success of the franchise but this week their good with or without him. TEXANS 37, Dolphins 3

The Patriots travel to Nashville to face the Titans and 2nd year starter Jake Locker to start off the schedule. The Pats are loaded with tight ends and defense maybe a little better this season. They’ll get tested by the young QB and Chris Johnson but if Brady is Brady he’ll take the Titans run game out of the equation. PATS 34, Titans 20

The barbecue will be in the air in Kansas City when the Chiefs host Atlanta on Sunday. The Falcons are ready to get last year’s nasty taste out of their mouth. Both teams running game should be good in week one but only Matt Ryan will move the chains in the air. This one could get ugly. FALCONS 37, Chiefs 13

One of the most intriguing matchups of the day has the Bills squaring off with the Jets at Met-Life Stadium. All eyes will be on Sanchez as he tries to fend off Tebow as the Jets starter. Meanwhile the Bills look stronger on defense and have a slew of running backs. I expect Fitzpatrick to protect the ball, Buffalo to control the clock and showcase their new and improved defense. BILLS 24, Jets 20

Cleveland has some reason for hope this year with the additions of Brandon Weeden and Trent Richardson. They welcome Philly on Sunday and their lack of receiving options are liking going to be their undoing. The Eagles will attack the Browns in an array of ways on opening day but if Vick goes down early all bets are off. Eagles 27, Browns 17

New Orleans is where everyone’s wants to end up this season but I’m pretty sure nobody wanted to start out there this year. RGIII and the Skins get that dubious honor traveling to the Superdome on Sunday. Suspensions, fines and court cases have surrounded the Saints’ off-season so no one knows what to expect from the Who-Dats. I warn the bayou bunch playing without Payton may have its bumps but Sunday the hometown team will be fine. They may start slow and the Redskins may try every trick in the book but by game’s end New Orleans will be good. SAINTS 34, Redskins 23

The Cardinals play host to the Seahawks on opening day and Russell Wilson will be on full display. His ability to sustain plays and running ability gives Seattle a chance to have a potent run game. The Seahawk backfield with Lynch and Turbin will be hard for the Cards to stop. Arizona had a QB battle themselves that may prove to be picking out of the lesser of two evils. The Seahawks protect the ball, run the ball and take away the ball on Sunday. Seahawks 27, Cards 13

The game of the day. Frisco travels to the Pack! The 49ers boast the best defense in the NFL vs what many consider the best offense in the league. Aaron Rodgers will be able to complete passes against this defense but the running offense for Green Bay will be irrelevant. The Niners offense will be interesting to see with the additions of Moss and Manningham. The Packers defense still isn’t up to par but if they get turnovers they’ll be ok. I just think the 49ers go into Green Bay and squeak one out. 49ERS 27, Pack 24

The Cam show resumes down in Tampa, Florida this Sunday. The Panthers are prime for a good season with Newton, Williams, Stewart and Smith. The Buccs did do a good job during the off-season acquiring Vincent Jackson and Carl Nicks but the Cats from Carolina will be too much this weekend. PANTHERS 31, Buccs 20

Big Ben VS Peyton. Peyton’s first game back. Last place Steelers played, lost in the Playoffs. Sunday Night. Yeah, I’m feeling it! A great night cap to end the first official day of pro football. Peyton will find out early if he can hold up against Dick LeBeau’s crew. Manning will have a great surrounding cast but so will Ben. Roethlisberger will have to carry the burden in Denver but that might be what they need to get ready for the marathon NFL season with a shaky running attack. Steelers get last win of the day to spoil Manning’s debut and avenge last year’s playoff fiasco. Steelers 24, Broncos 23