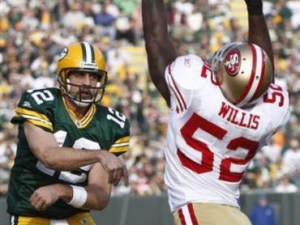 This is basically a homecoming for Aaron Rodgers, who grew up in Chico, Ca. He’d better not be expecting any dances because his card is already full for Sat. night if the date he’s truly looking for is on Feb. 3.

The reigning league MVP makes his home debut in the biggest game of the season. Green Bay is looking forward to avenging an early season 30-22 lost to the 49ers at Candlestick Park tomorrow night. Rodgers did most of the heavy lifting for the Pack that day passing 44 times, completing 30 for 303 yards. He also threw 2 TDs and a pick. The real problem Green Bay had that day was they only got 18 yards rushing from their running backs. Rodgers lead the team in rushing the first time these two played. He can not be their leading rusher again if they want to get to NFC Championship Game.

The Pack will face a different QB this time around against Frisco. Colin Kaepernick has been the starter for the 49ers ever since Alex Smith went down with a concussion in Week 10. Kaepernick has a 5-2 record as a starter and looks to win his first career playoff game on Sat. Colin, a native of Milwaukee, has to out duel perhaps the best QB in the game tomorrow night if he and the Niners want to advance. He won’t be alone. Frank Gore, the league’s 10th ranked rusher, is sure to get a heavy work load against the Pack.

The Green Bay defense expects to see a lot of Gore and TE Vernon Davis at Candlestick. I’m pretty sure the Pack defense is looking forward to the challenge though after Davis’ remarks. “I’ll just wait for my opportunities. I’m sure they will come, I said the same thing last year, even though I didn’t get the ball as much as I wanted last year, I said my opportunities will come. And maybe I’ll get them this week.”

The 49ers may have more problems on defense this game than Green Bay. The vaunted Niners’ defense may be at Rodgers’ mercy Sat. if they’re pass rush is hurt by Defensive Lineman Justin Smith’s partially torn triceps tendon. He practiced this week for the San Francisco and had this to say,”I think it’s just a matter of getting out there and going, I think like I said you just go out there and play until you can’t and be ready. I feel like I’ll be ready.” That’s great news for a 49ers team who only posted 38 sacks in the regular season.

The Pack and Niners will put on a show for about a half. Then Aaron Rodgers and Green Bay will pull away in the second. Smith’s injury will be too much too overcome.

Viewing Note: Rodgers is has the best passer rating in the league at 108. LB Aldon Smith had a NFC-high 19.5 sacks this season. Rodgers is still a little sore about the 49ers passing on him in the 2005 Draft. They selected Alex Smith #1 overall, who now is the backup in San Francisco.