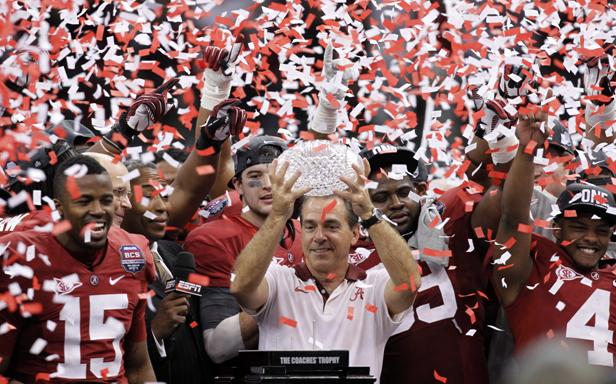 Nick Saban’s machine continues to push around, dominate and demoralize competition in BCS Championship games. The 2-time defending National Champion Alabama Crimson Tide has proved that they’re not the class of the decade but maybe the mark on which all programs will be measured by in the future. If Cam Newton and the Auburn Tigers would not have scored 28 2nd half unanswered points in the 2010’s Iron Bowl, Bama and Saban could very well have won 4 straight National Championships.

The Crimson Tide had a night for the ages in Miami in Monday. Bama scored the first five TDs on Monday and showed Notre Dame what damage 37 days of prep work could do. The Tide didn’t give up a point until 4:08 left in the third quarter. The Fighting Irish were out matched, out played and out coached in the Discover BCS Championship.

Bama has averaged 33.3 points a game in BCS Championship games. Saban has won 4 National Titles and QB AJ McCarron has won two. Both come back next year and things look bleak for everyone again. Yeldon, Cooper and Kenny Bell also return next year on the offense. The Tide start the season vs Virginia Tech in the Georgia Dome next year and if Monday’s 42-14 whipping was any indication of next year’s opener the Tide will roll again.

Previous « 10 Black Fashion Stylist You Should Know
Next Sports Talk: Hornets Vs. Rockets »