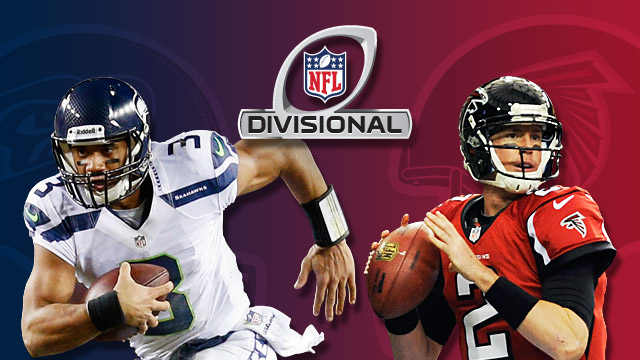 Russell Wilson’s play is arguably the best rookie QB play we have ever seen but his defense is definitely the nastiest we’ve seen all year. Seattle heads to Atlanta to take on the #1 seeded Falcons on Sunday at noon. Wilson already has done something that Matt Ryan is looking to do for the first time on Sunday, win a playoff game.

The fifth year starter for the Atlanta Falcons is 0-3 but may have his best chance to get his first playoff win this weekend. Atlanta has faced the NFC’s representative in the Super Bowl in their three previous trips to the playoffs. In ’08, they were victims to Kurt Warner and Larry Fitzgerald’s magical season. In ’10, they got housed by Aaron Rodgers and the Packers. ’12, the Giants defense keep’em off the board all day. This group may finally be ready to take the next step.

The reason they maybe ready is because of an improved defense led by Defensive Coordinator Mike Nolan. Atlanta is definitely a better group on defense than a year ago but their run defense could be their undoing. They give up a lot of yards but don’t allow opponents into the end zone much. The Falcons have the league’s 5th ranked scoring defense and love their new aggressive attitude.

The Seahawks have plenty of attitude themselves. Seattle’s bunch on defense will beat an opponent down them tell them about it. Led by Cornerbacks Brandon Browner and Richard Sherman Seattle looks to slow down the duo of Roddy White and Julio Jones. The Atlanta Receivers have accounted for 171 catches, 2,549 yards and 17 TDs. Those numbers don’t phase the #1 ranked Seahawks’ unit. They did lose Chris Clemons last week to a torn ACL in his left knee.

Seattle believes Marshawn Lynch’s foot injury won’t be an issue heading into Sunday’s game. Lynch and Wilson could pose a serious threat to Atlanta on the ground. Seattle ran for 224 yards last week against Washington with Wilson and Lynch accounting for 199 of the yards. Atlanta has given up 1,971 yards on the ground and is ranked 21st against the run.

I just feel like this one is going to come down to the wire. Atlanta is desperate for a win but the hot Seahawks are primed for an upset. Seattle’s Defense and run game are just too consistent to not to trust. Seahawks in a close one.

Viewing Note:Tony Gonzalez has not won a playoff game in his 16-year career. Seattle is on a 6 game win streak. The Falcons are 56-24 under Coach Mike Smith but 0-3 in the playoffs