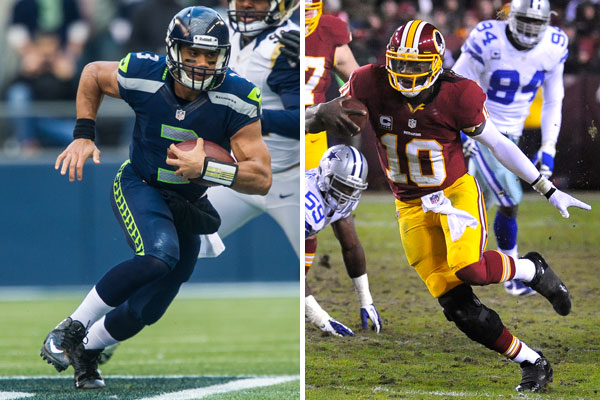 Russell Wilson and R.G.III have combined to pass for 46 TDs and run for 11 more. These two young men have done a tremendous job just to reach this point. R.G.III had an enormous amount of pressure on him to start his career. Tied to the hip of Andrew Luck, the former Heisman Trophy Winner, stormed out of the gates with a win against the Saints and seem to put to rest any questions about his ability to perform on this level. His performance in his first NFL action even had some folks asking did the Colts choose the right QB with the first overall pick in the draft.

Griffin had a few struggles in the following weeks but always kept the Skins close. Washington dropped their next 6 out of 8 games after opening day. That unflattering run prompted Redskins’ Coach Mike Shanahan to say,  “You lose a game like that, now you’re playing to see who obviously is going to be on your football team for years to come”.  The Redskins players responded after that comment by winning their next seven games. One player in particular shouldered the entire load of the coach’s comments.

Washington’s rookie Running Back Alfred Morris maybe even more deserving of Rookie of Year over Griffin. Morris’ attempts, yards and TDs all went up per game after his coach’s remarks. The former Florida Atlantic standout is the key to the Redskins success on Sunday. During his rookie campaign, Morris accounted for over 1600 yards and 13 scores on the ground and didn’t miss a game. His rushing counterpart isn’t to shabby himself.

Seattle is lead into this post-season match up by one of the most physical backs in the game. Marshawn Lynch has only been out rushed this year by Morris and Adrian Peterson. Marshawn, better know as beast mode, will be tough to stop. Lynch and lead blocker Micheal Robinson make a tough and rugged backfield that has only been aided by Wilson’s play. The Seahawks come in with the league’s 3rd best rushing attack but this is only the strength of the offense.

The strength of Seattle’s Team is their 1st ranked scoring defense. The Seahawks’ defense is by far the best defensive unit playing this weekend. They’re 4th in total yards and 6th against the pass. Seattle is very capable of making the Skins one dimensional especially if Griffin’s knee is still an issue. That could be a huge problem for Washington.

The one thing Seattle isn’t is one dimensional since Wilson’s arrival. The 25 year old rookie has captivated the Great Pacific Northwest and the entire country. He has thrown for more TD’s than any other rookie in NFL history and would have the best passer rating for a rookie all time if weren’t for Griffin.  The Seattle signal caller has a had great year. Wilson had beat out Matt Flynn for the job to start the season and was ok the first half of the season. His play the second half has been sensational. He has thrown 16 TDs and only two picks in the last 8 games while posting a 7-1 record.

I think this will be the closest game of the weekend. These two teams are mirror images of one another and come into game trying to establish the run while playing stout defense. The Seahawks a just a little bit better at doing so.

Viewing Note: This is only the second match up of rookie QBs in NFL playoff history. This is the Skins first home playoff game since 1998. Morris and Lynch are second and third in rushing in the NFL.