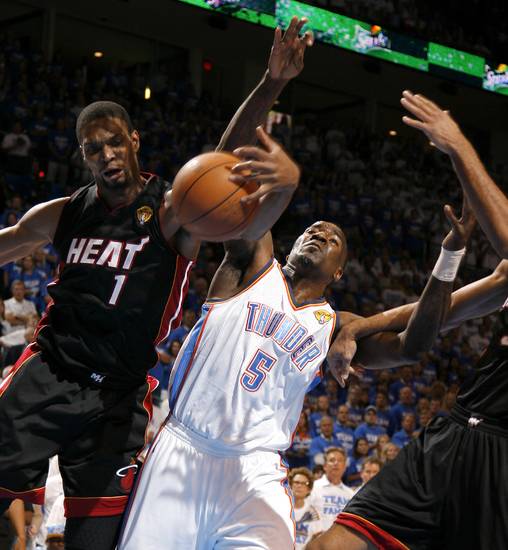 After two very entertaining matchups this what we’ve learned so far, the Heat can build early leads, OKC can respond and LeBron James is maturing before our eyes. Kevin Durant has scored more points than anyone ever in his first two fourth quarter appearances in the Finals, Westbrook’s shooting percentage is maybe the most valuable part of the Thunders game and Harden is a Sixth Man for a reason.
Harden’s suspect performance Game 1 was hardly notice due to Durant and Westbrook’s heroics. The Sixth Man of the Year recipient went 2-6 hitting a three-pointer, and just one other shot from the field. He didn’t get to the line once. The third year guard out of Arizona St. answered in Game 2 with a great first half. Harden only got two shots in the second but he did his job shooting 7-11 from the field and 5-7 from the stripe. James and Wade made it tough for the LA native to initially get going in the series but once he got a feel for the pace and adjusted his awareness of the level of play he played like the beard we’ve grown accustomed too.
Bosh suffered a similar start to the budding rivalry. He shot a horrid 37 percent from the field only getting to the line once. The 9-year vet’s intensity was off the charts in Game 2. His double-double provided the balance to both sides of ball that help the Heat control Game 2. Shooting 80% from the free throw line, pulling down 7 offensive boards and totaling 15 Miami needed every ounce of effort he gave up.
Westbrook was classic Westbrook. Starting Game 1 rough and having a so-so Game 2 he has received a healthy heaping of criticism. Most of its unwarranted because he has to shoot for both him and Sefolosha due to the lack of offensive production from the international defender. The second half of Game 1 was UCLA product’s best stretch of basketball this series by far. He still only shot 5-12 from the field but his aggression especially in the 3rd got him foul shots that energized him, the Thunder and Chesapeake Arena.
Durant on the other hand, has been shooting off the charts when the games have mattered most. Shooting 12-20 and hitting 4 out of 7 three bombs, KD has shown he’s ready for the moment. The only problem is Durant’s skills may be on full display too late in games to really tilt the advantage OKC’s way. The one true critical down point to Westbrook’s game is that he takes away shots from Durant and Harden when their on target and he’s cold. That’s not Durant’s only problem. James has the confidence to take the rock right at him. Durant’s lateral movement and lack of size seems to work against him in his match up vs King James. James is now 8 and 3 vs Durant all-time.
LeBron appears to be slaying his demons by dominating the 2nd & 3rd quarters of Game 1 and shooting all but 5 shots from the paint in Game 2. James got KD in early foul trouble and his efforts sustained the lead for the road team in the third. Struggling from the field in the fourth, he hit all his free throw and hit a big bank shot late in the period to help decide the match. Getting a 50% shooting night from Wade and a pacer setter game from the 2006 Finals MVP, James made the most of Bosh’s energy and the fact that Battier has kept Miami alive with a godly 70% avg from 3. Who would have thought the legendary Blue Devil, who almost signed to the Thunder in the preseason, would be the difference from an OKC strangle hold to a good ole fashion Dog Fight!