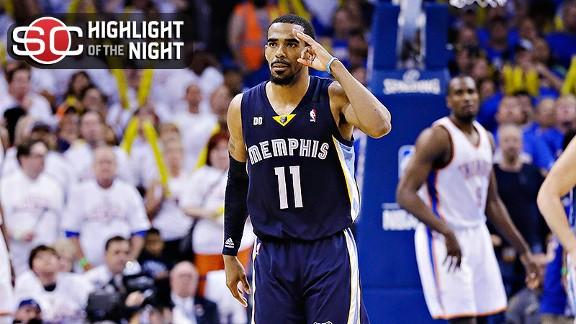 Miami looked like a well oiled machine in Game 2 of their Eastern Conference Semifinal on Wednesday night by dominating and dismantling the Bulls 115-78. The Heat built a lead as large as 46 during this historic game for both teams. Chicago has never lost a game that badly in the playoffs and Miami has never won a game by that big of a margin in the postseason. The Heat went on a 62-20 run at one point in the game leaving no doubt that the Bulls have their attention. Luol Deng, Derrick Rose and Kirk Hinrich are all still expected not to play in Game 3 but that won’t prevent the Madhouse on Madison from being a raucous crowd on Friday night. Wade said, “The fans are very loud. At the end of the day, once that settles down, it’s the game of basketball and you have to execute your game plan.” One thing is for certain, tonight will be physical. Staying with the Heat in 5.

Memphis and OKC are in the middle of their own brawl. The Thunder dropped Game 2 of the Western Conference Semifinal after a tough Game 1 win against the Grizzlies. Memphis looks poised to get to the Finals and OKC appears to be their next casualty. Gasol and Randolph present problems for the Thunder frontcourt and Memphis role players will shoot even better in FedEx Forum. OKC will finally face the reality that without Westbrook their season is near end. Memphis in 6 still feel right.

Golden St. continues to put on the most impressive shooting display in the postseason I have ever seen. I picked the Spurs but its hard for me to believe the Warriors wont go bizzirk in Oracle Arena over the next two games. Klay Thompson, Jarrett Jack and Stephen Curry have looked to be too much for San Antonio  to handle early in the series. The Western Conference Semifinal resumes tonight in Oakland and I admit, I was wrong. The Spurs will win in 6 instead of 5. San Antonio looked exhausted in Game 2 after the double OT classic that was Game 1. Tony Parker and company wont be able to handle the energy tonight but all they need is one out the two in Oracle. Kawhi Leonard has to play better to fend these young Warriors off.

The Pacers and Knicks will be the most fun series to watch as the Semifinal Round unfolds. This blast from the past has it all. A Superstar and his quest for greatness, a young Star looking for Superstar status, big men guarding the hoop, scoring point guards, deadly shooters, big time players off the bench with personality and mix in some tough as nails defense, this has all the signs of a seven game classic. Each team will get a blowout win at home but each one will lose at home in this series. This Eastern Conference Semifinal Series will come down to who can win 2 on the road.  Sticking to the Knicks in seven. Pacers get this one but I think Melo and J.R. won’t leave Indy down.