Sports Talk: Turn Up The Heat 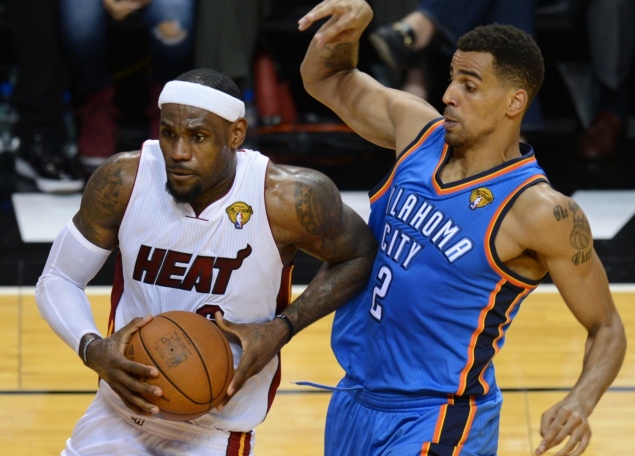 TURN THE HEAT UP!

Miami is clicking! Chalmers, James and Bosh all shot 50 percent or better in Game 4. The South Beach Squad shot & made more free throws, out rebounded the Thunder in addition to having more team assist. Russell Westbrook, wow, with a performance for Oklahoma folk lure gave his team every chance he could to stay in it. The passion and will he displayed in Game 4 spoke volumes in the face of all the criticism he has had to weather. Durant didn’t have a bad game but left much to be desired with his 4th quarter play. The question really is “Has anyone seen James Harden?”.

Harden is shooting a woeful 36% from the field in his first Finals Appearance. The Sixth Man of the Year recipient has accumulated 13 assists, 20 rebs, has made 13 out of 18 foul shots and committed 9 turnovers in four games. These numbers are really not bad but 36 percent from the field and avg 10 points a game has him on the milk cart. The thing Oklahoma City is probably missing most from Harden is his aggressively controlled pace to the game and some of that mohawk/beard swag to match. Durant obviously is having trouble at the end of the game with James on him, Harden has to ease the burden. Harden’s 20 percent shooting night is the reason OKC is done.

Westbrook’s night was amazing to watch. He showed D. Wade a “Flash” from the past. The bull rush he put on every time his team needed a bucket was fearless. Freezing LeBron with a lighting fast release on a jumper making it look effort less. Quick pull-ups from the free throw line seemed like they couldn’t miss. His attitude matched his production. Barking, yelling and growling with the grimace to match. The former Bruin became the first player to score 20 FGs in a game since Shaq in 2000. His 43 points may have been one of the best performances I have ever seen.

Unfortunately, it happened on a night that saw Chamlers, James and Wade combine for 76 points, go 16-22 from the stripe, and made six 3’s. LeBron’s post first game is continuing to erase the steps it taking to get that elusive first ring. Nearly getting a triple-double, it was his all-around game that took center stage in Game 4 of the Finals. The King is putting in a playoff run for the ages simply put. Mario Chalmers’ performance on the other hand was so unexpected it felt like a Christmas Morning.

Chalmers came to life after teammate Norris Cole scored 8 pts in 7 mins. The former National Champion winning Jayhawk had the performance of a lifetime. Shooting 60%, to offset Westbrook’s 62%, hitting three long balls and getting 2 steals seemed like he grew into this decade’s Fisher. His timely plays are what stood out the most. The early shot clock three bomb and lay-up with the MVP on the bench showed how much he has grownand trust his team has in him. If he continues to gives 2/3 of this production, the Heat will be hard to beat for a few years. Wade’s consistency, Westbrook’s passion and the new attitude of James all took a back seat to Super Mario Chamlers!