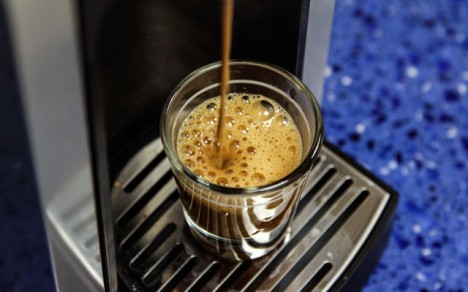 Starbucks has launched its version of the at-home, single-serve coffeemaker with the added feature of fresh milk pods, issuing a challenge to leading brands like Nespresso and Tassimo and steaming up the java wars.

Launched this week, the Verismo System enters the single-cup coffee machine segment, which has become an $8 billion industry in the US alone.

In a bid to stand out among the quickly growing crowd, Starbucks is vaunting a feature that allows users to make lattes using pods that contain a fine milk powder, distilled from fresh milk. Once the milk pod is placed in the machine, hot pressurized water creates a sweet 2 percent froth for use in lattes.

The coffee giant’s entry into the market is expected to serve as stiff competition for Nespresso, Tassimo and Senseo, which are among the pioneering and dominating brands in the single cup industry.

The base model retails for $199, while the fancier machine retails for $399 USD. Currently, the Verismo System is being sold online at verismo.com, and will be available at select high-end specialty retailers and participating Starbucks stores in the US, Canada and internationally in early October.