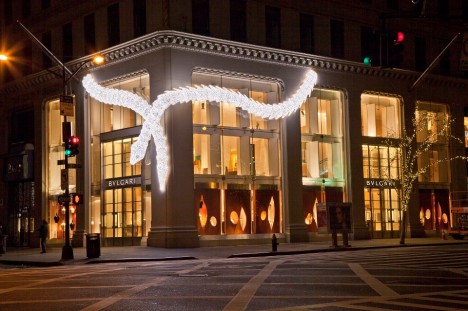 According to the Chinese Zodiac, 2013 is the Year of the Snake, and Bulgari took the idea to the extreme, wrapping an illuminated serpent around its entire building, situated on the corner of 57th Street and Fifth Avenue in New York
The shiny snake seems to descend on earth from the sky; its head measures almost 2 meters and it consist of 53 iridescent scales, each one measuring almost a meter.Source: jckonline Via.Luxuo