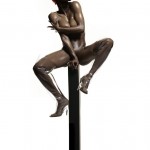 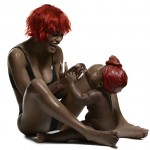 Teyana Taylor has had a pretty good year. The artist/actress/model stole the show with her appearance in Kanye West’s “Fade” video at the VMAs and followed it up with another sensual clip as she freestyled over “Champions” while covered in gold body paint.

The 25-year-old singer and model, who signed with Pharrell’s Star Trak Entertainment aged just 16, is pictured rocking fire red hair, diamond-encrusted swimsuits, a pair of clear thigh high boots, and not a lot else.

In the interview, Taylor speaks about her whirlwind year surrounded by Kanye and how being a mother to nine-month-old baby Junie made her conscious of the power her body holds. “I honestly don’t feel like “Fade” would have had the same effect had I just been 21, hot body, single,” she says. “It’s the opposite of the cliché that says kids will slow you or your career down.”

Head over to PAPER to read the full interview