The Fabric of Culture /// The Paparazzi & The Popular 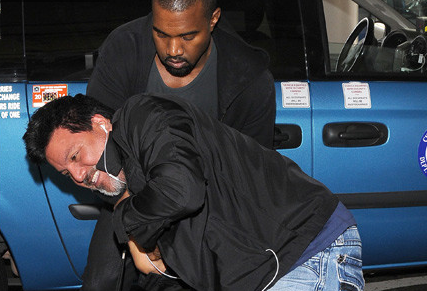 Teetering between fashion icon and musical genius, Kanye has created quite a buzz, even at though at times self-proclaimed, about himself since his debut as an artist in 2002. Undeniably talented, the passionate Mr. West has been known to be quite opinionated when it comes to his craft. With a larger than life ego Kanye has propelled himself into a stratosphere of greatness, and is often times seemingly untouchable, as he has dubbed himself the “God of Rap.” However, what has been a constant throughout Kanye’s career is that the paparazzi are his Achilles’ heel. Run in after run, has resulted in a few arrests, lawsuits, and as of late Kanye will find himself battling a physical assault case filed by Daniel Ramos of whom he had a scuffle at LAX back in July. It can be easily argued that being photographed, questioned, and praised comes with the territory of celebrity, especially when one possesses a flashy and haughty personality such as that of Mr. West. The question then becomes when is enough, enough? Kanye has recently spoke out that one of his biggest fears is his daughter being harassed by the paparazzi and is in support of enforcing stricter laws to protect the children of celebrities from the paparazzi, along with Halle Berry and Jennifer Garner.

Do you think that Kanye creates these situations for himself, or is his space as a creative and individual constantly intruded upon by the paparazzi? Thoughts?