The Grapevine: Dawn Richard “Armor On” 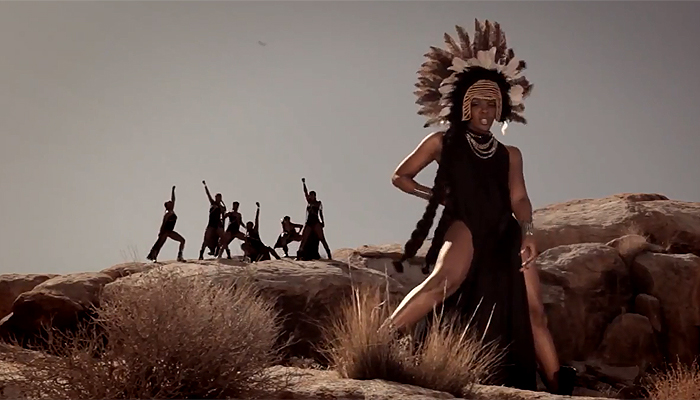 New Orleans Native, Dawn Richard has moved on from her relationship of six years with Bad Boy Records. We have witnessed many ups and downs in her career with Bad Boy, she went through Diddy’s “Making the Band” process on MTV and was chosen to be a part of the all-female group Danity Kane. After the Danity Kane Disbandment, Dawn was asked to be a part of Diddy’s new project Diddy Dirty Money which recently disbanded.  Now she’s an independent, solo artist on the grind putting out hot new music in the form of an EP, titled ‘Armor On’. Earlier this week, the new project soared to #1 on the R&B /Soul iTunes charts within three hours of it’s release. That says so much for her talent and supporters. She premiered a video of her single “Bombs” not too long ago and I LOVE IT!

Dawn recently stopped by Power 105.1′s ‘The Breakfast Club’ and dished on why she left Dirty Money and Bad Boy.  She also discussed what happened to her 5 year relationship with ex- Qwanell “Que” Mosley (formerly of Day 26) and why she didn’t collaborate with Dirty Money’s Kalenna after Dirty Money disbanded.

Check it out below:

On closing the Dirty Money chapter and Leaving Bad Boy
Puff was done. He decided to be done so I was like alright, what I got to do next? I’m not going to sit around too long. Puff got a lot of ventures going on and he never really gave a reason but once somebody tells you, “The boss says it’s done” you have to have the next chapter done.

We did tour, and we were having a great time. And I think when it came to sales—I don’t really know what it really was, but when he decided it [was over], it was time to make a decision on what I was gonna do. So when it came time to meet with him, I said, “Okay, so what’s the plan?”  And he was like “I don’t know if we’ll be able to put you out til like maybe two years from now.” Cuz they got artists that have been waitin! And you can’t just [jump in front], and I wasn’t a solo artist before then. So he would have to explain that to Jimmy [Iovine and] that would take a long time. And he was like, “I don’t think you want to wait.” And he was right, I didn’t. So I asked if I could be released, and he talked to Jimmy, and said “I talked to Jimmy and told him if we let you go, it might be a mistake. But if Jimmy doesn’t have the space right for you, then I’ll let you go.” And I gave him six years. I love him, and I’m grateful for that let go because people didn’t expect it.

On if she owes him anything (a piece of her publishing, etc)
No, I don’t owe him anything, I’m clear. He let me go.

On Why She Didn’t Collaborate With Kalenna
I think you have to have a group of people who want to work together and I think with being with Puff and that whole situation it’s very hard for women to be like “Let’s go and conquer the world together” when you have all those parts playing together. I think Kalenna is going through her vibe and I think she’s super dope.  For me, I don’t have time to wait for people to rock with me. If you rock with me, rock with me. If you don’t, let’s go get this money.
On her relationship with Q
(Which she didn’t want to speak much about)
We’re not together anymore. I think for me, I just have to make the right choice about what’s good for me.  I’m a good woman and you just have to make sure you get respected the right way. I wish him the best and he’s really cool.
Did he cheat on you?
No, it’s cool.

Were you heartbroken over that?
Yeah, but it’s all good.  I’m a woman…things happen. This is real life. Bad things happen, but it’s about moving on. I’m off it, and that’s why I don’t even explain it because I don’t want to talk about it.

Do you address it with your music it at all?

I address my relationship with the music industry in this EP, and I think people can relate to it in their relationships. For me, I relate to the situation to what I have because that was a deeper situation for me. It’s just more honest.

Did you and Q really have a serious relationship or did it seem like it was for television?
No, it was real. I’m from New Orleans. The whole put cameras in my face, that’s not what I would want for myself.  I don’t want a public relationship. I’ve never been that person.  I fell for somebody, I tried to hide it at first, but they saw it. I didn’t even want to. So, that’s what makes it sucky because it was genuine.

Are you in a relationship or dating now?

I’m dating, but right now I don’t have time to do nothing but do this music because I’m damn near doing this project by my damn self. Shout out to the two, five and six people that’s rocking with me.

But you still need to have sex.
(She gave many shoutouts. LOL)
Shout out to that! I do, but I also need this check so that’s more important. You can have a lot of sex when you’re rich.

On her EP title ‘Armor On’
I think R&B is great right now where it’s at, but I think it’s real linear and I want to push people to have a concept–a conceptual R&B album, which they don’t really have a lot of these days. So for me, my journey was, I went out into the world and I thought everybody was cool. In reality, it’s not. A lot of people don’t know that, so I’d rather put the ‘Armor On’ as a title and make it the concept of, ‘ if you put that on and you go out into the world there’s nothing you can’t do’. So every record is aggressive. It feels like you’re going to battle.

People are scared because it’s dying right now. People aren’t buying records. So why would you take a risk on a brown girl? There’s no real brown girl that are considered pretty right now poppin’ in the game for real. Dark-skinned girl. Kelly Rowland…There are, but I’m talking about in that pop–that cross-over world isn’t allowing it. So for someone to come in who’s R&B/Soul then try to crossover pushing the limits with this innovative sound. So I had to prove it with the numbers.

On if someone came to her and said, “I’m about to sign to Bad Boy”, what advice would she give to them?
That’s not my place to give them advice. I didn’t get a booklet. Nobody told me. Figure it out. That’s what makes the experience great. You can say what you want, six years at Bad Boy –they must have done something right because at the end of the day, alone I got this. At the end of the day, somebody was professing and they are bread crumbs being spilled so it was up to me to figure it out. At some point, somebody did a good job somewhere.