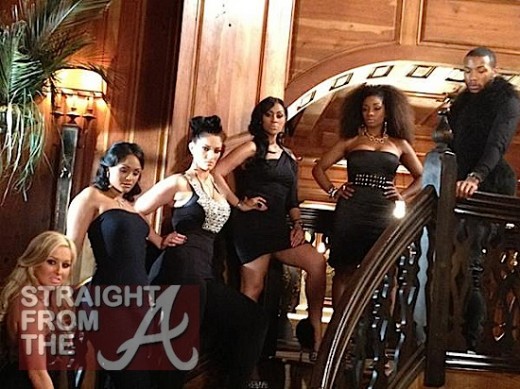 After recently being exposed on the new season of Love and Hip Hop by singer K.Michelle without his name even being mentioned, one would think Mickey “MempHitz” Wright (Toya’s husband) would be trying to show the world how much of a good husband he is. Instead he is currently shopping around an 8+ minute trailer to different networks. I honestly don’t think BET will go for this foolery of a show. However, I can take some lucky guesses on who will because the content shows black women and others in the worst light possible…and a white woman who vocally demeans black women as well. I am too OUTDONE!

Sarah Oliver is a white “video vixen”/booty model who takes the cameras into her plastic surgery appointments to document her ass shots.  And she explains why she only dates married men. She also called black women’s genitalia “gross” and says, “A brown skin pu**y with a pink inside…who would want that?!”

Maliah Michelle is a proud stripper who has dated several celebs…married and single.  And she dishes on all the material things she gets…so it justifies why she’s a better person than most apparently.  Sadly, she’s the most articulate one, but is clearly misguided.

MJ is apparently trying to become a rapper, I won’t speak more on that, lol.

Brandan speaks on the athletes, actors and other celebrity men he gets down with.

Rosee Divine is a French “model” who is at the beck and call of NBA players and celebrity men.

The end quote from the trailer voiced by one of the cast members: “If a b*tch got a pu**y and she aint got a million dollars, she needs to see a psychiatrist.”

I can’t believe MempHitz, as the creator and executive producer of the show, could even come up with this type of nonsense. I am too disgusted with lack of respect these women (and a man) have for themselves and for MempHitz to want to document and glorify it.

I want to know how Toya feels about the whole thing.