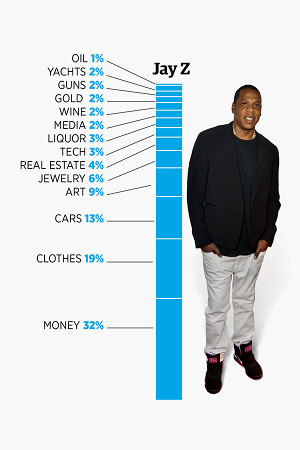 It’s voyeuristic fascination that makes Forbes lists ever popular. From Beats by Dre to Roc Nation Sports, it’s certainly a diverse range of investments. This time around, Forbes has imagined what the five wealthiest hip-hop artists portfolios would look like if they were to reflect the assets they most frequently refer to in their music. Forbes has taken the lyrics of Birdman’s Priceless, Jay Z’s Magna Carta… Holy Grail, 50 Cent’s Before I Self Destruct, Dr. Dre’s 2001 and Diddy’s Last Train to Paris, and broken them down into individual, easy-to-read charts. To create the lyrical portfolios, Forbes tallied up every mention of assets – including frequent synonyms – and any citing of publicly traded companies. It all makes for an interesting read.