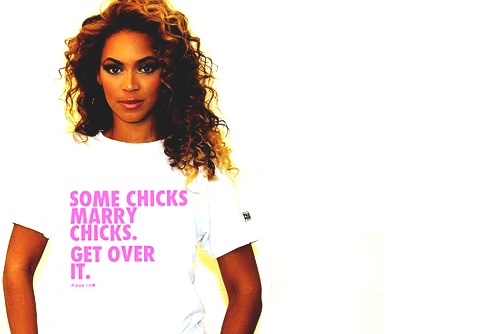 Beyonce says, “If you like it, you should be able to put a ring on it,” no matter what your sexual preference is.

Last year, there was a photoshopped picture of Beyoncé with a t-shirt that said, ““Chicks Marry Chicks. Get Over It”, to try and get her attention so that she would speak up towards marriage equality. It’s a little over a year since that, and the Supreme Court is now hearing arguments regarding gay marriages before a decision is made to overturn Proposition 8 which banned same-sex marriages in the State of California.

Beyoncé posted two pictures on Instagram to show her support. One of which was a handwritten note:

Last year, Jay Z was the first of the Carter clan to speak out in support of same-sex marriages when he compared laws like proposition 8 to discrimination against blacks:

I have always thought of it as something that is still holding the country back. What people do in their own homes is their business, and you can choose to love whoever you love. That’s their business. It is no different than discriminating against blacks. It’s discrimination, plain and simple.

Over the past few years, the LGBT community has had plenty of victories as several states (including New York) began to allow same-sex marriages, however,  the Defense of Marriage Act law still discriminates against same-sex couples by denying them federal benefits, like social security and filing of joint tax returns.