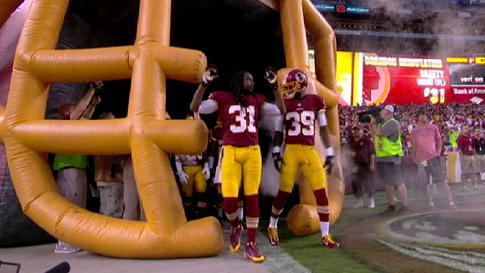 To show their support and pay tribute several members of the NFL’s Washington Redskins players ran out of the tunnel before the game against the Cleveland Browns on Monday Night Football with hands held in “surrender” tribute to Michael Brown, the Missouri teenager whose death sparked days of rioting and unrest in Ferguson a town outside of St.Louis,MO.

Brandon Meriweather and other defensive backs entered the field with their hands up, a widespread symbolic gesture that protesters have used among reports that Brown was unarmed and not resisting when he was shot and killed by a police officer.

“We just wanted everybody to know that we support Michael and acknowledge what happened in Ferguson,” safety Brandon Meriweather told USA TODAY Sports. “Crazy things happen every day in this world.

“It was all of ours idea, something we decided to do as a group just to show our support.”