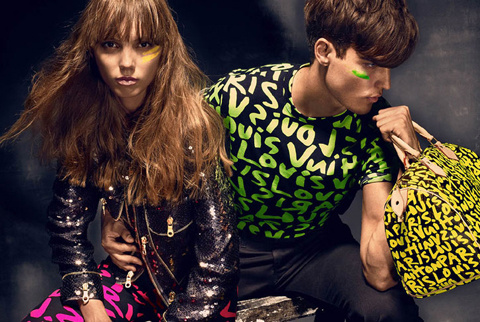 After the successful collaboration of Louis Vuitton and artist Stephen Sprouse in 2001, the two teamed up for the second time in 2008, utilizing the very same graffiti print. The second time around they worked on bags, sneakers, shoes, sunglasses as well as some clothing and many more accessories. For both Fall 2006 and 2008, Marc Jacobs utilized Sprouse’s 1987 graffiti leopard images for handbags, shoes, and scarves for Louis Vuitton, which sold-out instantly.

Stephen Sprouse was a fashion designer and artist credited with pioneering the 1980s mix of “uptown sophistication in clothing with a downtown punk and pop sensibility”.

The era of fashion that I refer to as lively and vibrant was widely dominated by this Graffiti print in both POP and Hip-Hop cultures. It was hard not to see someone in a video, or on a blog site without a piece of this collection being worn.