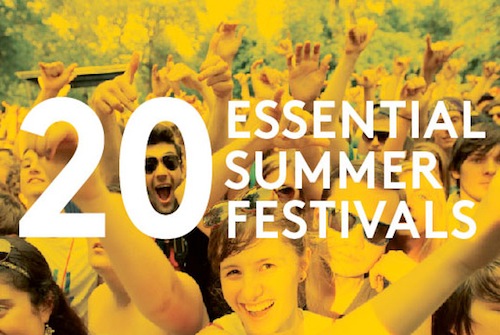 The Roots’ annual hometown festival offers a mix of rap and indie rock heavy hitters, performing on the waterfront. The Roots will back up De La Soul and Rakim will perform Paid in Full in its entirety.

The picturesque Parc-Jean Drapeau on Ile Ste-Hélène offers forested areas, flowerbeds, and open-air artwork. A nice, serene backdrop for a Snoop Dogg set.  See the full top 10 list of North American festivals after the click and head to Pitchfork to see the 10 European picks.

In addition to the bands, Bonnaroo also offers a Comedy Central-curated lineup of comedians, a silent disco, a movie tent, a shopping center, a hair salon, a poster show, a “big ass water slide,” and a beer festival. “The Academy” offers workshops in “art, theatre, percussion, break dancing, instrument building, and gardening.”

The alt-rock behemoth takes over Chicago’s Grant Park with local food, a kid’s stage, a dance stage, and more.

Woodsist Records, run by the band Woods, brings out their stacked roster and a few friends for their annual festival at the Henry Miller Library

The traveling hip-hop extravaganza hits three locations this year. Bone Thugs-N-Harmony will reunite to play E. 1999 Eternal in its entirety, Method Man and Redman will perform Blackout in full, and the Hit Squad (EPMD, Redman, Das EFX, K-Solo, and Keith Murray) will reunite.

Jay-Z curates and headlines this new festival on Benjamin Franklin Parkway in Philadelphia. President Obama may or may not do his Al Green impression.

John Darnielle will play a two-part solo Mountain Goats set: the first part will be acoustic Mountain Goats songs, and the second will be… all metal covers on piano. Megafaun will collaborate with Arnold Dreyblatt, Chris Corsano will serve as the “improviser in residence.” (Hopscotch is co-directed by Pitchfork Contributing Editor Grayson Currin.)

Co-curated by the Afghan Whigs’ Greg Dulli and ATP, I’ll Be Your Mirror returns to the Jersey Shore town. There’s a cinema, mini-golf, bowling, and unlimited play at the Silver Ball Museum Arcade and Pinball Hall of Fame.

Previous « Fashion News: French Luxury Brands Fight Back Against Counterfeit Products
Next Are You Ready To Watch The Throne Again? »