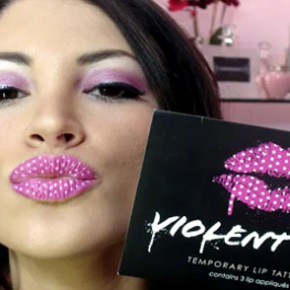 Myhellofalife.com previously covered a post on Violent Lips..#HellofAlifeR Jana took a further look at the trend..

So I was in Sephora the other day and saw something that really caught my eye. There’s a newish, cutting edge makeup trend called Violent lips. I’ve seen these on models and celebs in editorial shoots and nights out on the town; but I didn’t know that this funky lip accessory was available to the public.

Violent lips are lip tattoos created by entertainment industry veteran Jeff Haddad and his daughters Isabella and Sophia. The idea is that the lip appliques stay on the lips for up to eight hours without you having to reapply throughout the night. Violent lips come in an array of outrageous colors, sparkle and prints-including leopard-that is sure to make a statement wherever you go.

I’ll be the first to admit that this look is pretty fly, but I have not yet tried them because it’s hard to find an appropriate setting in which to wear them. No doubt they’re amazing, but you can’t exactly pull this look off at the office, unless you’re looking to get fired. Violent lips are more fitting for a night out on the town with girlfriends if you want turn more than a few heads. This look is in no way conventional, so it’s likely to garner a few negative reactions, so be ready for that. However, if you’re a daring fashionista this should be your next cosmetic venture.

Makeup artist extraordinaire Shena O. says: “I think they’re cool as far as editorial work goes, and the red glitter one is hawt! I would probably  only rock the metallic glitter versions if I were to wear them”.

As for me, I’ll be wearing some at the myhellofalife launch party! What do you think about this new trend?