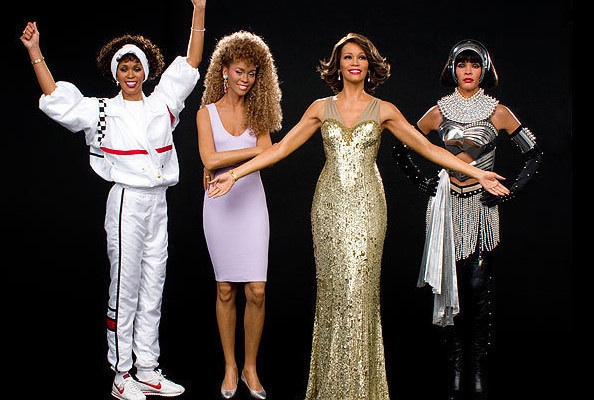 February 11, will be a year since we lost the great Whitney Houston, so I’m happy that Madame Tussauds unveiled the four new Whitney Houston statues at this time. Madame Tussuads is known for the amazing wax statues she has done to honor some of the most popular people in we know of, dead or alive.  This is the first time in the museum’s history that they have done four different statues of one prominent person at different points in their lives.

The wax statues were all made in the museum’s London studio but will be dispersed to the museums in D.C. (National Anthem at SuperBowl), Vegas (“I Wanna Dance With Somebody” video), L.A. (statue from her movie The Bodyguard) and NYC will receive the statue in the gold gown from a 2009 photo shoot.

Whitney’s sister-in-law and manager, Pat Houston, was very happy with how they came out saying in a statement:

“We were extremely honored when Madame Tussauds approached us about doing four figures of Whitney from different points in her 30-year career.  This is something we are excited to do for the fans.”

The NYC statue will be revealed today (Thursday) in the city.  Check out more details over at the museum’s website.

I am in love with the one from her “I wanna Dance With Somebody” video. Which is your fave?
Previous « Frontrow Boutique Spring 2013 Collection Video shot by Maybach Films
Next Update: Mendeecees Harris’ Statutory Rape of a 15-year-old Trial Reveals Some Shocking Information »