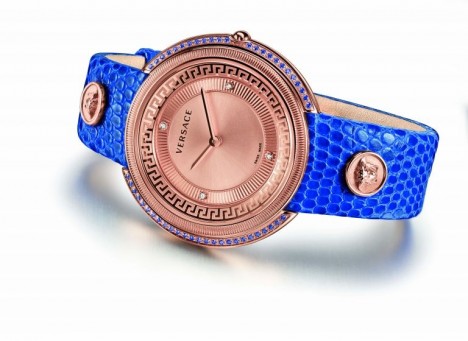 Italian luxury brand Versace is unveiling a new collection of watches under its Versus label at Baselworld, one of the luxury calendar’s biggest events.

When late last year it was announced that Versace was ending its collaboration with London-based designer Christopher Kane on the Versus collection, the fashion world was eager to hear what the Italian luxury label would be serving up next.

While Kane has gone on to focus on his successful main line (which received a sizeable investment from Kering), Versace chose to explore its options in new digital (“a key word that describes the Versus tribe”) and non-seasonal directions.

We’re still eagerly awaiting the clothing collection for the brand by young British designer J W Anderson, the first in a series of different collaborations, which is set to drop (according to Versace’s online countdown) in just over two weeks’ time.

The Versus timepieces include the Tokyo, Ibiza and Agadir which blend cutting-edge technology and materials with the traditional luxury of the label.