Want to spend your next Vacation in a Luxury Jail Hotel? 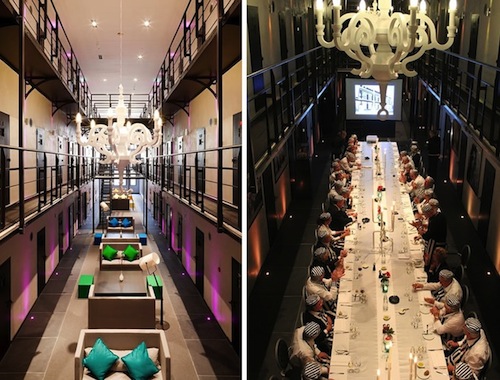 Het Arresthuis is a 19th-century-prison in the Netherlands that was abandoned some time ago. The unused penitentiary was transformed into a luxury hotel. The structure was remodeled with modern and chic touches while preserving its rich history as a former penitentiary.

The 150 cell facility houses thirty six luxury rooms and seven suites. Four of those suites are called the Director, the Jailer, the Lawyer, and the Judge and they are located in the sports area and the warden’s chambers. The hotel offers common occurrences including a double bed, flat screen T.V.’s, personal coffee makers in each room and free WiFi, to name a few. Each suite is designed and has its own personality. The restaurants are set-up in a communal style and boast a lot more to offer than the famed jail meal of bread and water.