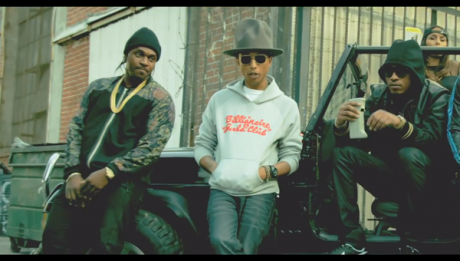 The rapper Future is known for his liberal use of Auto-Tune, but now he’s got another charmingly low-rent bit of technology to share.

The Atlanta rapper-singer has a great new single in “Move That Dope,” which features guest turns from Pharrell Williams, Pusha T and Cameo. To accompany it, he posted an addictive new video game that’s a slightly more menacing version of vintage Nintendo titles.

“Move That Doh” (a more family-friendly version of the title) sports 8-bit graphics straight out of the ’80s heyday of cocaine trafficking.

No actual drugs appear in the game — one moves “doh” around to “Collect. Distribute. Earn Respect” — but it’s an endearingly retro take on “Grand Theft Auto” nihilism.

There’s not much to it — you drive around hauling your cargo while trying not to hit walls and fall into the ocean. But as Internet timesucks go, at least this one comes with a killer soundtrack.

The game comes after a similarly winning Ronald Reagan-era inspired video [warning: link contains profanity] for the single, with a guest slot from Pharrell and pop culture’s favorite bit of contemporary headwear.