Who Has The Better Crew MMG or Young Money? 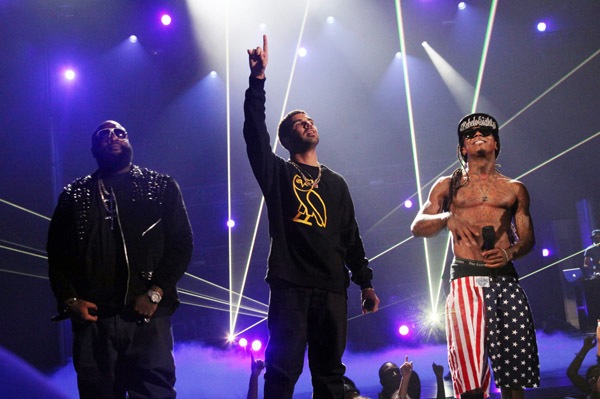 Rozay has placed his self in another level from most, with his powerful lyrics to his incredible visuals constantly in rotation on TV and all over the internet..How he has the world infatuated with *Inset Ross Grunt*and lets just be honest there is no denying that Rick Ross and MMG hasn’t been in heavy rotation for about two years now and it seems it just won’t let up..as the Boss Ricky Rozay continues to keep adding weapons to his roster..from the DC native of Wale who is killing the game with his witty punch lines, & poetry flow as well as his love ballads for the ladies and the girls show their appreciation by keeping his songs on Billboard top 100..While he stays on the road teasing the sneaker-heads on what he’ll wear on his feet next on a new stage in a new town because Wale lives on the road it feels like lol..Then there is Meek Mill the fast talking hustler from Philly who is just winning the streets with every verse his most recent Dream Chasers 2 mix tape did about 2.2 million downloads in like 4 hours upon release thats just crazy! And his highly anticipated first album “Dreams & Nightmares coming out August 28 should do well as well..There is Stalley the underground hip-hoper from Ohio who style may have won over the fan base Ross might not was reaching at first, you know the guys who always say “I like real hip-hop”.. What about Popular New Yorker French Montana also signed to Bad Boy but reps his MMG ties just as hard continues to let out street anthems like “Shot Caller” & Everything’s A Go” for the clubs..

And Lets not forget Maybach O are mostly known as Omarion who Ross surprised most by signing him but I assume Ross was looking for a in-house  R&B cat  why not get someone who already knows the industry?  And may even still be carrying over his own fan base from his B2K days.. There is the out of control never know what he will do next thug on the roster Gunplay who many loyal Ross fans will know has been around since the beginning Im talking EveryDay Im Hustlin’ days..And Gunplay has recently inked his own solo album deal with Dej Jam not bad because many thought he would sit on the shelf with all the other talent surrounding him.. And most recently Ross has singed Rcokie Fresh a young new rapper from Chicago who is definitely gaining buzz and signing to MMG will only help that rise.. The rumors are still swirling around about who Ross will sign next many expect LA natives Nipsey Hussle and/or Kendrick Lamar as well as some saying Ross is in the market for a female rapper or singer being added to the crew..Right now the sky is the limit for MMG..Ross openly talks about how he admire the old ROC movement and he is trying his best to create his own..

Young Money the smaller brand of the umbrella that is Cash Money Records (even though clearly YM’s 3-headed monster is the headliners of the entire YMCMB roster )  are with out a doubt a machine..There are plenty of artist signed to Young Money too many to name really but lets focus on the Big 3..No not the Miami Heat but the guys who often ball just as hard as them in Miami lol Young Money’s Nicki Minaj, Drake and Lil Wayne..These 3 what can you say..they all can stand alone with no help at all from a group but according to them they love the family atmosphere that is YMCMB..Take Nicki for example.. yes, we all know she started as a rapper with rough hard lyrics and she still spits gutter rhymes from time to time but c’mon her true money maker (no not her butt) is her ability to cross over into pop music..songs like “Starships” and “Super Bass” has landed her endorsement deals like no other.. the girl is doing Pepsi ads people..Not to mention that the female competition is almost non existent..Then there is the founder of YM New Orleans native Lil Wayne so much can be said about this guy, the self-proclaimed best rapper alive since the best rapper retired (Jay Z is still rapping FYI) has almost a cult following his fans just basically stay in Wayne’s World with him..I mean Wayne does and says whatever the hell he feels and it will sale over a million just because its him simply put..

From his Carter’s series to his rock albums to now new found skate boarding addiction whatever he’s into his following just goes with him..Im convinced that Lil Wayne next to Kanye & Jay Z has to have the most diverse fan base in the rap genre  and thats saying a lot coming from artist who lets just say is not ideal image in the eyes of mainstream America..But one person who is Mr Clean-Cut is Wayne’s best signee ever Drake.. Drake brings a lane into rap that may have never been there before..I mean yes, there has been heart-throbs in rap before like LL in his prime or Nelly when he was mid-west swinging’ But Drake has the ability to not only win the hearts of  his female fans but also make music that many of the fellas can relate to as well..Drake may not spend much of his time in the hood but I assure you his music does..no, maybe not his slow soft songs but ones when the boy actually just raps and talk about the money he blows with Stunna or the Hoes he run through with Trey Songz  it won’t be a surprising sight when you see guys rapping along with those lyrics..How about the popularity of his OVO brand growing with help from his producers Boi-1da & 40, also his R&B crooner The Weeknd gaining fans at a rapid pace..This Toronto boy just seem to have the game right where he wants as he begins work on his 3rd solo album..

With all of that being said its no secrect that MMG & Young Money often make songs together as well as hang together..so this is not a beef thing more of friendly competition but I ask you if you had to choose a side..What crew do you pick?