Why are old Hip Hop Heads So Bitter with new Generation? 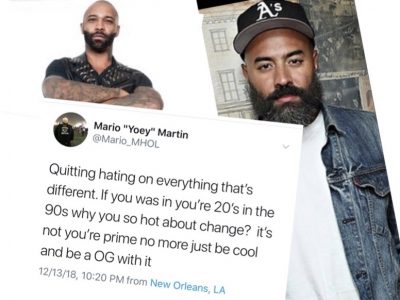 Welcome to the new generation. Streams is King, the Huncho. Ask Quavo the Huncho, Migos are arguably the hottest group on the planet earth and you may ask how? It’s because in 2018 heading into the new year Migos control the numbers! Tekashi 69 prior to being locked up was calling himself King of New York with Jay Z and Nas still living, because he owned Billboard charts.  It’s simple this new generation make bold statements and they feel their numbers back it up.

Now with that being said the old school is upset, some of it is valid and I get it but let’s talk the bitterness of some of these radio personalities aka former gate keepers of hip hop. Funk Master Flex hatered for Drake. Joe Budden hatred for any artist under 30, and most recently the Kodak Black and Ebro situation at Hot97. Kodak situation is main reason I decided to write on this topic.

Allow me to elaborate, I personally think it’s uncool for radio personalities or whoever in the culture to constantly bash the younger rappers bc it’s a different sound to the previous “Golden” years of the 90s. My thing is if you dislike these young artist so much and or unwilling to do you’re research on them, why even invite them on air or camera for anything? What ends up happening is the mayhem that occurred between Joe Budden and Migos interview awhile back or the recent Kodak’s walk out on Ebro.

Sad thing is I feel Ebro sold his soul because he definitely was sneak-dissing and provoking Kodak the entire interview as if his goal was to get a rise out of him. 15 mins after Kodak walks out Hot97 YouTube page is promoting the walk out and getting more NUMBERS than the actual interview. Sad. But guess what I just said they was getting the NUMBERS. The same NUMBERS, they try to say don’t matter on these your artist new music streams apparently matters for these radio stations views count.

What always gets me is does the older cats ever stop to think back on when they were coming up listening to hip hop and what the community and critics were saying? People would say “Hip Hop is not music they just talking.” Or “Hip Hop won’t last”. But look at it now flourishing more than ever and influencing everything on a global scale. I could keep rambling on and on making valid points really for the young generation and for the older side if I chose to but I rather we all just take a page out of Martin Payne book “can’t  we all just get along.” For the culture one time. Let’s get more blends of collaborations like Teyana Taylor with Wu-Tang Clan or Drake with the side of the Throne not wearing a MAGA hat (Drizzy and Jay-Z). Because if old heads want to admit it or not the new generation is here to stay and all their streaming fans are here to stay as well. Like 49-year-old rapper Jay-Z would say Men lie, Women lie, but Numbers don’t.