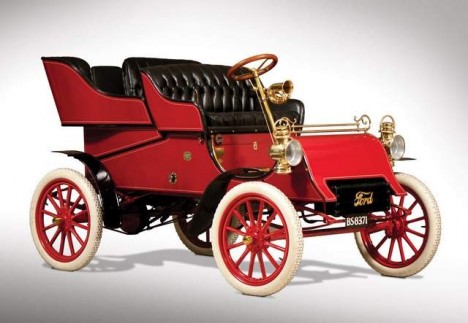 A 1903 Ford Model A, one of the oldest surviving cars made by Ford Motor Co., will be up for auction in Hershey, Pennsylvania, next month.

The car, which originally sold for $850, has all of its original early features, including the rare Kingston carburetor and the original coil box stamped No. 30.

The first-run Model A was produced from July 1903 with sales ceasing in 1904 when it was replaced by the Model C. The two cylinder boxer was mid-mounted and mated to a planetary gearbox with two forward speeds and one reverse.

The 1240kg car could eventually reach a top speed of 45km/h. The band brakes took a long time to slow the car back to zero and were only on the rear wheels.Via.Luxuo

Previous « Trey Songz Co-Stars In “Texas Chainsaw 3D” (Official Trailer)
Next Did You Know $250,000 A Year Is Middle Class In America? »