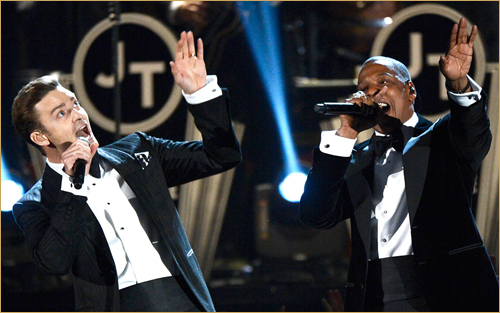 Due to the crazy demand for this year’s Yahoo! Wireless Festival, Live Nation have now announced the headlining acts for a third and final day. There is always usually a ‘dance act’ day at Wireless but this year it seems to have been scrapped. With tickets selling out in record time, the music promotor has decided to preview Jay Z and Justin Timberlake’s North American ‘Legends Of The Summer Stadium Tour,’ on Sunday 14 July. So if you thought you were unfortunate for not bagging a ticket for Friday and/or Saturday, think again and this time think positive because the closing date at Yahoo! Wireless Festival is going to be incredible! Joining the ‘Suit & Tie’ pair on the day will be A Tribe Called Quest, Nas, A$AP Rocky and Rizzle Kicks.

Justin Timberlake and Jay Z are already confirmed to independently headline Yahoo! Wireless Festival on Friday 12 July (Justin Timberlake) and Saturday 13 July (Jay Z). Tickets for these two dates were the fastest selling in the history of Wireless and just goes to show this has to be the UK festival of 2013! Additional acts confirmed to join Justin Timberlake for his solo headline show on Friday 12 July are Ke$ha, Wretch 32, Conor Maynard, Bingo Players and Iggy Azalea. The likes of Snoop Dogg, Trey Songz, John Legend, Miguel and Frank Ocean were previously announced as confirmed acts. The additional acts to join Jay Z on Saturday 13 July are Macklemore and Ryan Lewis, Flux Pavilion and Zedd. These guys join the bill with the likes of Emeli Sande, Rita Ora, Kendrick Lamar, Miguel, DJ Fresh (Live) and Calvin Harris.

Festival goers will be treated to a dazzling open-air live music experience, offering the chance to watch the best in popular music in one of London’s most iconic sites – Queen Elizabeth Olympic Park.  With many more acts and details still to be unveiled, Yahoo! Wireless Festival 2013 is set to be the biggest and best event on this summer’s musical calendar.Tickets for Sunday 14 July  – go on sale Friday March 15 at 9 a.m. and will be available at www.wirelessfestival.co.uk