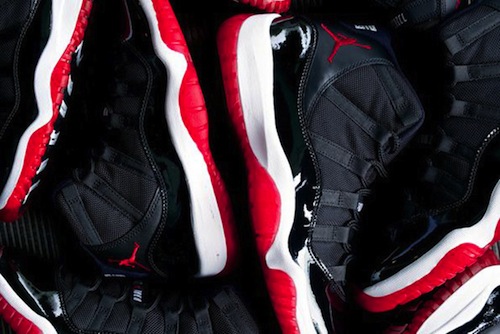 This was an exciting year for sneakers in my opinion, I am now going to attempt to show you my top ten picks to recap the year. In 2012 there was a lot of hype behind a few pairs of sneakers I will show those as well as I’m give to you just some my personal favorites that may have slid under the radar.So in no particular order here we go..

This shoe just seems to be perfect.

one of my favorite shoes as a child made a return this year and they were still eye-catching as they were back then.

These shoes are significant for 2012, LeBron earning his first ring earlier this year is def worthy to make this list.

This shoe celebrated its 23rd birthday this year and the re-release was crazy for this shoe. The hype alone plus this is just a classic look on your feet makes this shoe a must on this list.

For most people they would probably consider these sneakers not amongst the elite, but I disagree. I think the scoring champ Durant’s KD IV was a pretty dope release of 2012. I chose the original color way for this list but I must say a lot of good color ways were released for this shoe. honorable mention to the “mint candy” color way.

As Kobe career is winding down I think sneaker heads should cherish the moments when new Kobe sneakers are released and we are able to watch them on his feet during a game. These were my favorite color way released this year”Wolf Grey” gets my stamp of approval.

These are a personal favorite for me that was released this year. Im a fan of this shoe for the comfort and style.

Many maybe shock by my choice of placing two pairs of Asics releases on this list, but I really was impress this year with the Asics brand I truly believe because they lack the polarity of Nike they dope releases were slept on this year. I applaud the Asics team and I will be watching for what they do in 2013.

Swizz Beats put his stamp on the shoe game this year with his push of the Reebok back movement. To start it all off Swizz designed the Kamikaze’s a personal favorite of mine this year.

It felt like 2012 was the year of the foamposites, they were seen on all for favorite celebs and rapped about on numerous songs and the different color ways just seemed to keep releasing.

Well judging by my picks Nike & Jordan brand dominated yet another year of sneaker wars are you surprised? They’re were more shoes I could have mentioned but these round out my top 10 for 2012. Please leave a comment telling me your opinions and what shoes I was crazy for leaving out?